Perhaps one of the most difficult scars is having a cruel and toxic mother.

Who always criticized her child and set him unattainable standards, because she knew that he would never reach them;

And even if they reached her, they would never manage to be tall in their eyes or loved by her.

Therefore, it is more than painful to live this kind of reality, to be a woman marked by the bad relationship with her mother.

A woman with scars that she tries to overcome every day while mourning forever the great relationship that other women have with their mothers.

Because her own was an addict, a psychopath, a narcissist or simply a cruel manipulator, but ultimately her mother;

Of which they find that she could have loved her if only she had ever been able to be better.

However, there is something you need to know that you should always carry in your heart when you feel this way.

Know that love is not something that needs to be earned, and that the strange course of life has brought you to this point;

Also be aware that you are a heroine and your scar is a beautiful testimony that you have won the battle with your toxic mother.

You are still here, and as long as this is the case, you can see the sun shining.

1. You often feel that you are not worthy of love

Those women who have dealt with their toxic mother throughout their childhood easily develop a sense of low self-worth.

But beyond that, the feeling that they have not earned anything beautiful in their lives, with their scar going even deeper.

In a way where they feel like they don’t even deserve to be loved by anyone, especially a romantic partner who sees all the great things about them.

They also have low self-confidence and feel that they are never beautiful or worthy enough to live at all.

Their appetite also changes from time to time, and they even have phases when they can’t eat;

But there are also phases when they eat a lot to relieve their pain.

So most of the time they struggle with their own feelings and their self-image, which is distorted due to the bad relationship with their mother.

Which always criticized, abused, ridiculed, condemned and even beat them, instead of giving them all the love they needed in this world;

After all, she is her mother, the person she should love the most…

That’s why they believe that if that wasn’t the case, no one else can do it now.

2. You feel like you will never be as “good a woman” as your mother

With toxic mothers, it is often the case that they apply very strict standards to their daughters.

Therefore, nothing they do is enough and they constantly criticize every decision and choice of their daughters.

In doing so, they also take little account of their feelings.

Because they do not see them as a reflection of their own self, but as competitors.

So, a toxic mother might be unimpressed by every progress you make and the way you live because it contradicts her beliefs and norms.

She is of the opinion that you have to fulfill them, because otherwise you have disappointed her.

So it will be the case that she condemns and belittles you if you choose to make a career instead of being a housewife, if you decide against having children, or if you choose a partner who does not suit her.

While you are ashamed because your life is not as she imagined it for you.

3. You don’t know how to set boundaries

Having a toxic mother has such a big impact on a person, because in addition to everything that happens, we have to remember that you are dealing with your own mother.

So, in addition to everything that happens between the person and their mother, this is still the person whoyou gave your life.

Therefore, it is a rather difficult realization that the person who should nourish and protect us the most has turned away from us.

However, if it is the case that you are dealing with a lot of toxicity and abuse by your own mother, one thing is definitely certain;

That we are not forced to tolerate this kind of behavior from her or another family member just because they happen to be our family.

Therefore, no, we don’t have to have a good relationship with our mother if she abused us and hurt us emotionally – we have to set limits for her;

And don’t feel that it’s our fault that she behaves the way she does, because toxic mothers actually violate our boundaries because they are: “Your mother” – a phrase that gives them power.

Also because of the things that our toxic mother has done to us, it is only our decision whether we want to have her in our lives or exclude her;

For it is not our job to heal our mother, but to heal ourselves to be better parents and role models for our own children.

4. In relationships, you tend to repeat toxic patterns

After dealing with the toxic behavior of one’s own mother and confirming it for so long, just because she happens to call herself that;

Does the abused person carry this pattern into other emotional aspects of their lives.

Because it is known that even a terrible woman can become a mother, but because of her behavior towards her child, she may not have the right to call herself that.

The abused person will not be able to recognize and accept this until much later in life.

However, because the abused child cannot realize how wrong his mother’s behavior is, he begins to see this as the only kind of affection he deserves.

This leads to low self-esteem and toxic relationship patterns, because this is a type of affection that feels “familiar” to the child.

That is why it often happens that the woman who carries the scar of a toxic mother was often disappointed in love.

By being belittled, insulted and humiliated by her partner, who had similar manipulative tendencies as her mother.

However, she only sank so low because she was looking for love that she could never and does not have to receive from these people.

However, dealing with so much pain and at the same time so much love is also a virtue that distinguishes extraordinary and strong women.

Who, after realizing their value and accepting their past, are able to attract a love that makes their soul blossom.

5. You feel like you don’t really belong to the place you are right now

Since our parents, and especially our mother’s embrace, express the sense of belonging where her arms feel like our home;

Will a toxic mother make a person feel excluded and rejected from their home and even their environment.

A bad relationship with one’s own biological mother also makes a person more susceptible to abuse by peers or people who show manipulative tendencies.

Because children whose parents have failed to protect and nurture them at times when it was most important easily develop low self-esteem.

The feeling of being marginalized and not belonging anywhere is therefore a reflection of the bad relationship they have with their mother;

For it goes back to the time when the child wanted to run away from all the problems that were waiting for him at home;

And to the mother who has failed in the education and protection of the child at the weakest stage of his life.

This characterizes especially young girls, who see in their mother a role model and shape their own self-image of femininity according to their model.

So if, as a young woman, you feel like you don’t belong anywhere and just want to take a plane that takes you far, far away.

You may have been the victim of your mother’s toxic influence and now bear the scar of her inhumanity. 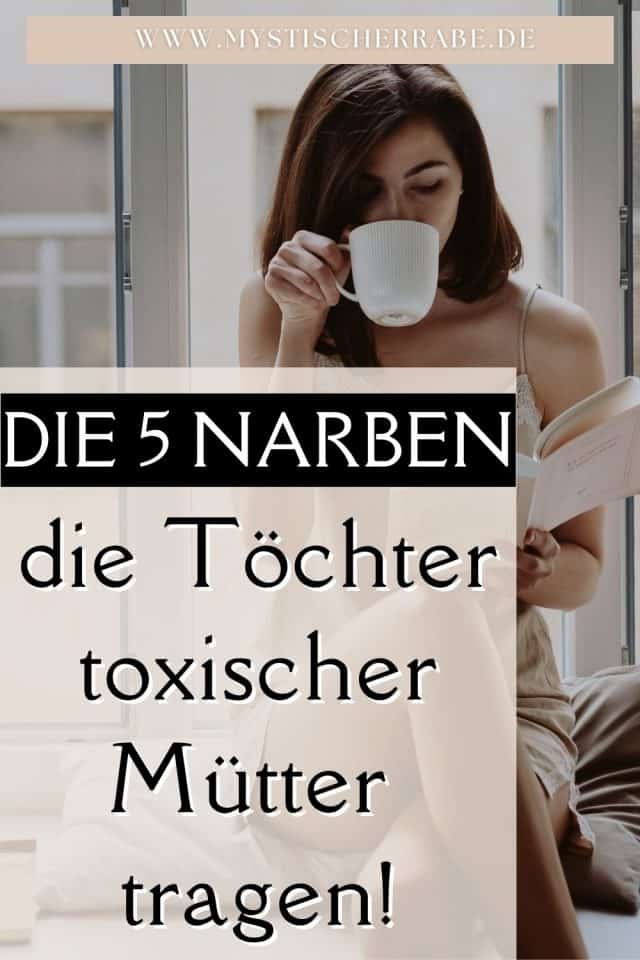