The Sri Yantra, also known as The Sri Chakra, is a mystical diagram used in the Sri Vidya school of Hinduism.

Among hundreds of Yantras referring to principles, deities and planets, Sri Yantra is considered one of the most promising and powerful of all.

It is called the “Queen of the Yantras” because all the other Yantras were derived from him. It is also commonly used in Hindu ceremonies and meditation practices.

The Sri Yantra is considered a sacred object in Hinduism, usually drawn on paper, cloth or wood.

It can also be engraved in metals or other materials and is even designed in 3D form in metal, mud or sand.

What is a Sri Yantra? 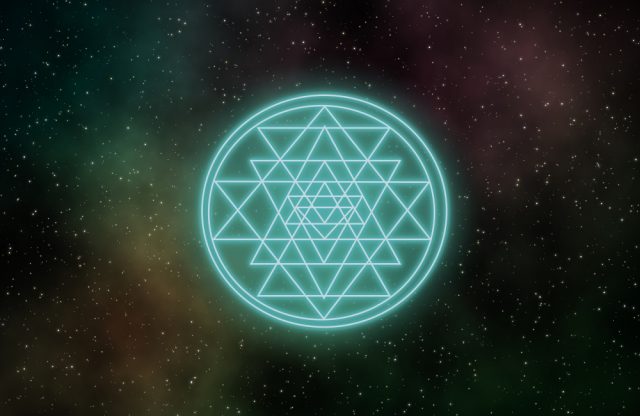 The Sri Yantra, also known as the Yantra of Tripura Sundari or Shri Yantra, is the most powerful Yantra because it is a symbol of our entire cosmos.

The Shri Yantra represents the divine union of polarities between the male and female principles and illuminates the nature of tantric practice.

The geometry of the Shri Yantra seems easy to draw, but in reality it is very advanced because it is not easy to bring all the triangles together in a well-proportioned way.

A “yantra” is a mystical diagram used to contemplation and to look at the broader metaphysical aspects of the universe and all the different parts that make up the whole.

In particular, this design is considered one of the most powerful yantras and is used to bring wealth to the spiritual and physical world.

Wealth in this sense does not necessarily mean money, but general well-being and freedom from negative influences.

In fact, “Sri” means wealth, and “Yantra” is freely translated as “instrument,” so this example of sacred geometry is about bringing wealth through this particular instrument.

If we take a look at this symbol, it is easy to see why it has been revered as a sacred geometric symbol for so long.

They also stand for the concept of balance in the universe, which could also be associated with the Chinese philosophical concepts of yin and yang.

The round dot in the middle of the pattern is the “Bindu”, which is said to represent the origin of creation and the relationship between the Hindu god Shiva and Shakti. 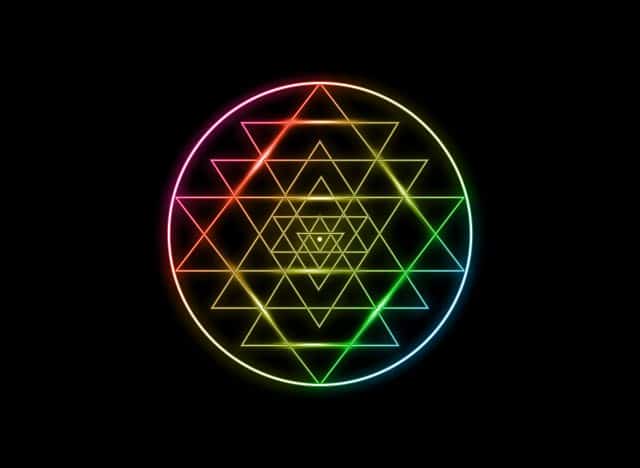 The Sri Yantra symbol consists of nine interlocking triangles, which is why it is also known as the Navayoni Chakra.

The triangles surround a central point called ‘bindu’ and represent the totality of the cosmos and the human body.

When depicted in three dimensions, it is called Mahameru, where Mount Meru got its name from.

The yantra is one of the contemplation and meditation tools used by tantra practitioners who believe that a yantra is a symbol of cosmic unity.

Yantras are a sacred representation of a deity and can act as shields against negative energies.

Yantra literally means “machine” or “instrument”, and all real yantras consist of a combination of less geometric shapes:

So what is the relationship between sacred geometry and tantra?

All Yantra elements correspond to different aspects of energy and consciousness.

The union between Shiva (represented by Bindu) and Shakti (female deity, represented by Trikona) is symbolic of the source energy of creation.

The Sri Yantra is said to be the symbolic form of all gods and goddesses in Hinduism. According to Hindu belief, it possessed Brahma (the Lord of the Earth) and Vishnu (the Creator of the Universe) praised it. The symbol consists of several elements that we want to examine first. 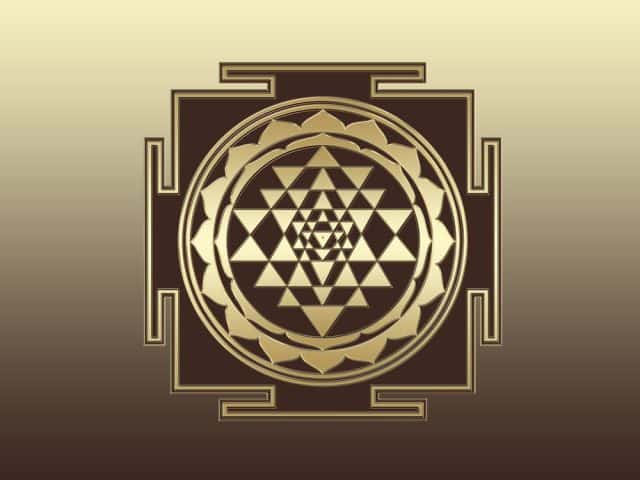 An important aspect of this topic is the meeting of mathematics and spirituality. All Yantras are geometric structures known as Hil■ To be used in meditation and worship.

They are characterized by a central point from which geometric shapes spread.

Sri Yantra is a 12,000-year-old mystical symbol considered the “mother of all Yantras”. The name translates to “sacred instrument” and is based on the Golden Proportion.

What is that, you ask?

Well, part of the mathematical appeal lies in the fact that you see it everywhere in nature, and that’s nowhere as true as in the case of the magic number 1.1618, better known as the Golden Proportion.

Every natural pattern is built according to this ratio, from the ratio of radii of successive spirals on a shell to the alignment of our ear canal.

Yes, even our hearing is based on this ratio!

Mathematically, the Sri Yantra also recreates the wave pattern created by the vibration of the OM seed mantra.

In addition to nature, this symbol can also be found in art (Leonardo da Vinci’s Vitruvian man) and in architecture (the arrangement of the Great Pyramids of Giza).

So the Sri Yantra is based on a powerful, mathematical concept that is closely linked to our world.

The inner figure of the interlocking triangles 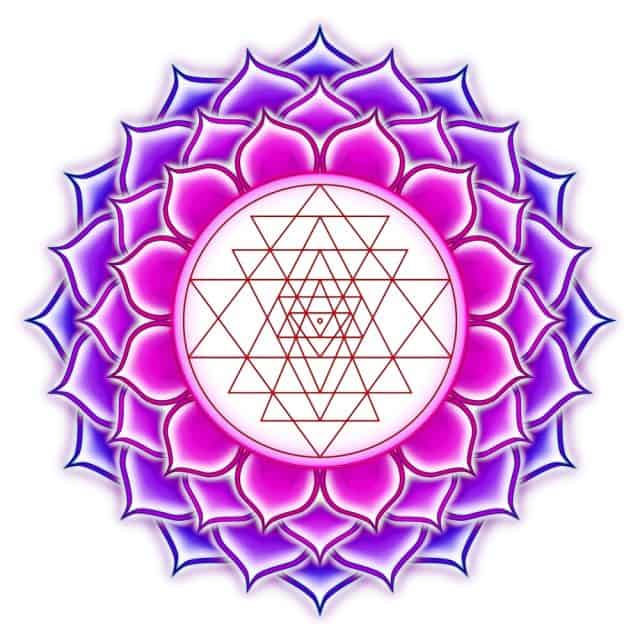 This figure is symmetrical to a vertical center axis and contains triangles facing up and down.

The interlocking of the triangles symbolizes the opposing principles that complement each other, and the general balance and symmetry of the entire figure represents the unity of God.

The two concentric rings with the lotus pattern 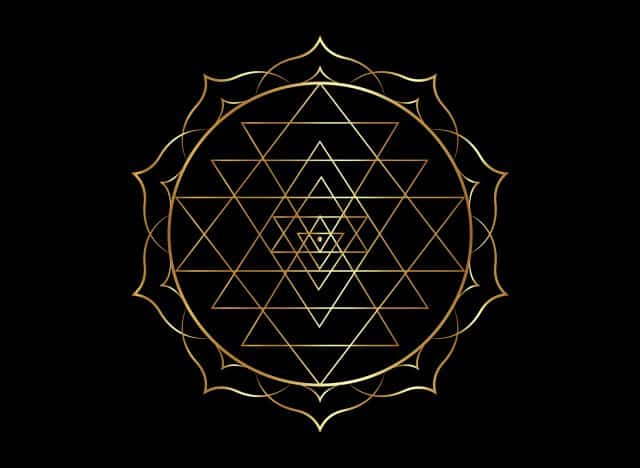 The outer pattern bears 16 lotus petals, while the inner pattern has 8 petals. These petals represent the sanctity of the diagram inside, which serves as a tool for yoga meditation.

Each of the 8 petals governs an activity such as language, movement, grasping, disgust, pleasure, attraction, equanimity and excretion.

The 16 petals stand for the complete fulfillment of all hopes and wishes. They stand for the ten organs of perception and the five elements: earth, fire, water, space and air.

The sixteenth petal stands for the mind that collects and interprets the information from the perceptions of the interacting elements.

Where should the Sri Yantra stand? 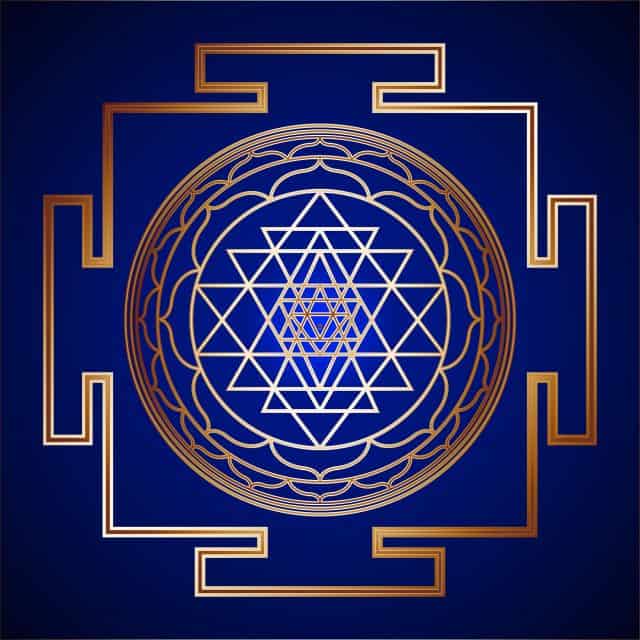 If you are considering placing Sri Yantra art in your home, probably the best place is one of your largest rooms.

The Sri Yantra symbol is inherently captivating to the sense of sight, so I would recommend placing it in a place where it can be seen from all sides – ideally on a wall facing west.

How to use the Sri Yantra? 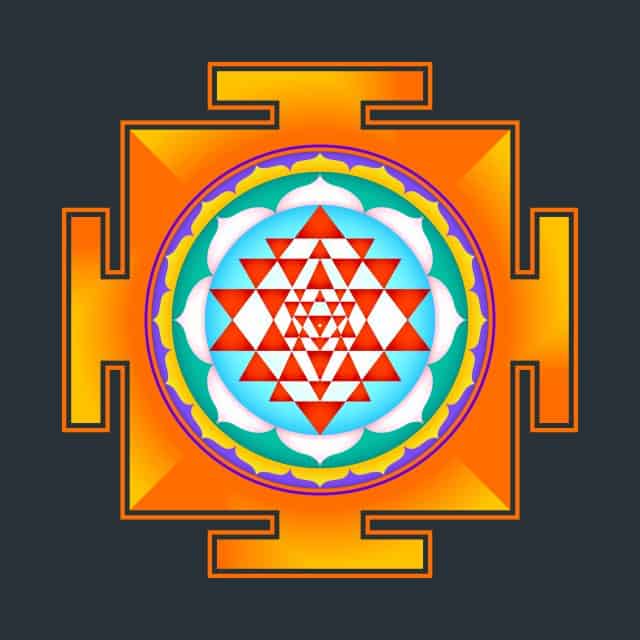 The best way to own the Sri Yantra and then use it for meditation is to purchase Sri Yantra jewelry, such as .B necklaces or bracelets.

They can be taken anywhere and will always remind you to slow down, concentrate and meditate. 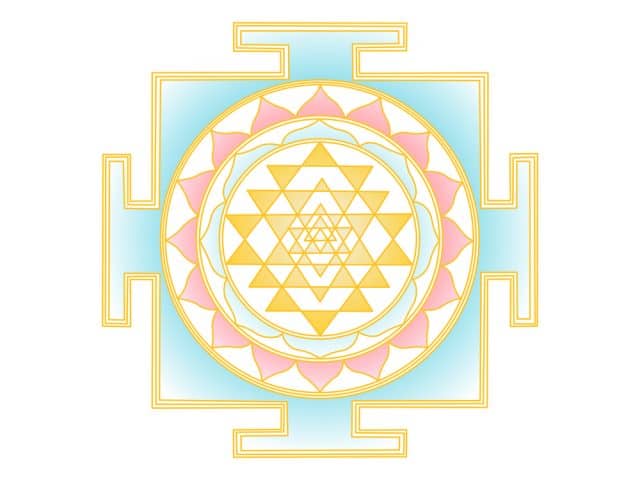 The design of the Sri Yantra is of course very appealing to the human mind, so you can also consider hanging it on your wall or any other place in your home.

In summary, Sri Yantra is a simple yet complicated device that you can use in your daily life to increase your concentration and immerse yourself in deeper meditative states.

Probably one of the easiest ways to bring the energy of this sacred symbol into your life is to wear Sri Yantra jewelry.

Sri Yantra Benefits – How to Meditate with Sri Yantra 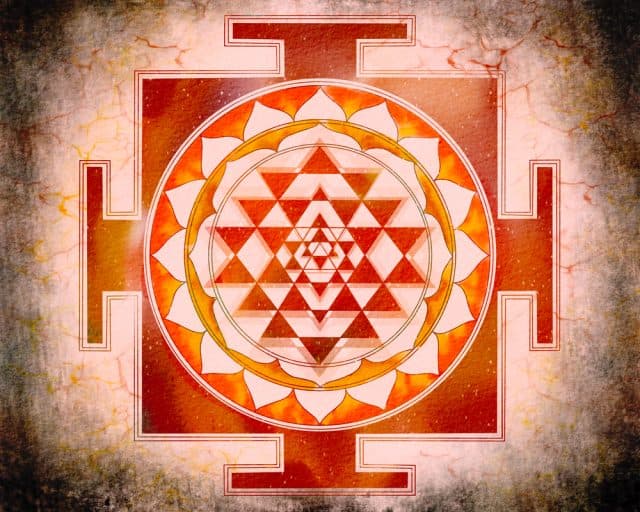 In the description above, you may have already figured out that this type of design offers a wealth of opportunities for contemplation about life and the universe.

In fact, this pattern is meant to represent the cosmic plan and help us gain insight into the highest form of consciousness.

If you want to use this pattern as a tool for self-knowledge or for deeper metaphysical insights, sri yantra offers many advantages.

It is also useful to use this Symbol in a mindful way, be it on a screen or in the form of jewelry, tattoos or clothing.

One way to do this is to meditate on it. As with any other type of meditation, find a comfortable seat and start looking at the pattern.

You can start in the middle and move slowly and mindfully towards the frame of the symbol, absorbing every single layer of symbolism.

Once you have done this, you can start working your way inwards. You can do this for about 15 minutes, but remember to take some time to rest afterwards (5-25 minutes) to get the full benefit of this meditation.

If you take the time to examine this sacred geometric pattern in this way, you will have many opportunities to reflect on all its mysteries and simply appreciate all the basic forms that make up our complex universe.

What are the benefits of Sri Yantra meditation? 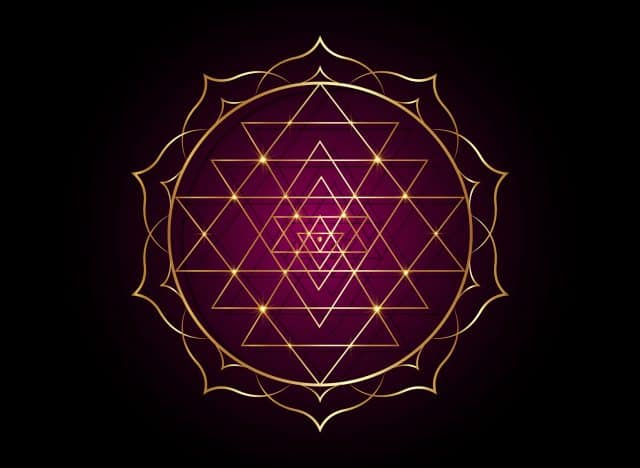 It is said that meditation on the Sri Yantra will bring you contentment, peace of mind and concentration.

Sri Yantra meditation can also bring you peace of mind by removing the clutter in the mind and balancing your life energy.

Meditation with this sacred symbol allows you to expand your consciousness, create a protective aura around your body and attract more financial wealth.

So what is the best way to perform Sri Yantra meditation?

Your goal should be to meditate on the symbol until it settles in your mind. This will bring you closer to enlightenment, and all the secrets of the universe will be revealed to you.

It has been proven that just staring at the central point of Sri Yantra, known as Bindu, can positively affect the mind by stimulating the pineal gland.

The pineal gland (third eye chakra) is one of the most important keys to your spiritual awakening.

In a life that is becoming increasingly hectic and stressful, the Sri Yantra symbol stands out as a dispenser of much-needed rest and reminds us of the importance of deep, meditative concentration.